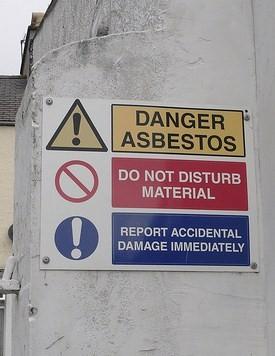 July 1st is Action Mesothelioma Day, an annual event in which awareness is raised about the continuing suffering caused by asbestos-related cancer. Here a member of Manchester Solidarity Federation and the Greater Manchester Asbestos Victim Support Group talks about the destructive effect asbestos has had on the lives of thousands of workers.

Once asbestos was seen as the magic mineral, but now has been branded the killer dust. Recent figures put deaths in the region of 100,000 a year world wide from asbestos-related diseases. Mesothelioma is the most virulent of the cancers and lung conditions caused by asbestos.

Mesothelioma is not the only asbestos-related lung cancer. Dr Jukka Takala, Director of the European Agency for Safety and Health at Work was shocked by the data compiled by the HSE. In an email to the BRITISH ASBESTOS NEWSLETTER he wrote: "Combining deaths from both cancers could a death toll exceeding 5,000 per year . The fact that these numbers are increasing is disturbing. The fact that asbestos use is growing in some developing countries is indefensible."

The reason for Britain's tragic position is rooted in our industrial, economic and political history. "The current mesothelioma epidemic is far from 'incomprehensible'," writes Dr Geoffrey Tweedale. "It was the inevitable outcome of actions and policies that were forged in localities such as Rochdale,where powerful industrial interests, local officials,and politicians proved so expert at defending asbestos and slowing regulations."

As the incidence of mesothelioma has risen in Britain, so has the determination of insurers to avoid asbestos-related liabilities. As a press release from the Unite union put it: "Insurance companies sold policies to cover risk. Now that risk has become a reality they to picking apart the words in their own policies."

The ConDems, ever ready to help their capitalist friends, are proposing that injured people lose some of their compensation to reduce the costs of claiming compensation. The Government is considering proposals by a certain Sir Rupert Jackson to reform civil litigation funding and costs.

Sir Rupert says that the insurance industry is bearing too much of the burden of claims, and that those injured should have to pay some of the costs taken out of their compensation. Insurance companies have already have been paid premiums to cover them for claims made against them. Why should injured workers have to subsidise insurance companies?

Why should innocent workers be made responsible for the costs of criminals and corporate killers?

This article was published on 1 July 2011 by the SolFed group in Manchester. Other recent articles: