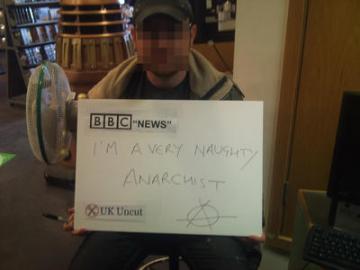 A member of Liverpool SolFed said, "on March 26th, UK Uncut felt the blunt end of state repression. Together with the roaming blockade formed by the Radical Workers' Bloc, they caused significant economic damage. Attacking the economy and making the country ungovernable, is the only way to defeat austerity. That 138 of the 141 arrested were UK Uncut activists only underlines that.

"We don't think that you can 'win the argument' with the state or bankers, as they do. But we recognise the value of their tactics in inflicting exactly the kind of economic damage that we advocate."

Members of Liverpool SolFed were amongst those who signed a letter to UK Uncut which stated that "the whole idea of dividing 'good' and 'bad' protest serves only to legitimise police violence and repression" and "those of us fighting the cuts are all in this together."

This is not the first time that Liverpool SolFed have engaged in practical solidarity at Radio Merseyside. Previously, members had joined the NUJ picket lines in support of the staff pensions dispute.

A video of the event, and an interview with a UK Uncut activist at the occupation, can be seen here.

This article was published on 2 April 2011 by the SolFed group in Liverpool. Other recent articles: