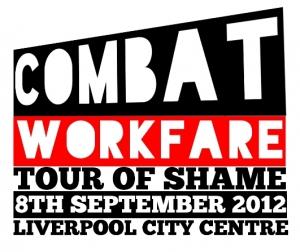 On Saturday 8th September, as part of the campaign against the government’s workfare programme, members of Liverpool Solidarity Federation, the Anarchist Federation and various other local activists held a tour of some of the city’s most high-profile exploiters of the unemployed.

First stop was Poundland in Williamson Square, who recently restarted their work programme following a high-profile court case brought by students who were forced to work in one of their stores. Banners were unfurled and we immediately began engaging with the passing public, passing on information about workfare and letting them know Poundland’s role in it.

From the start we were chaperoned by the police, who stood and watched from a distance. One young woman approached the picket to ask why we thought workfare was a bad thing. Following a conversation with a couple of members of the picket, she went away with a leaflet and a different perspective on the matter.

The manager of the store soon appeared and began to ask the police to move us on, saying we shouldn’t be allowed to behave like this outside a shop. She also asked for one of our leaflets, which she took to the inspector. The police continued to keep their distance and did not engage with the picket in any way.

We managed to give out around 600 leaflets at Poundland and had some interesting conversation with both passers-by and customers who were overwhelmingly positive about the picket. Several members of the public refused to enter the store when they heard what Poundland were up to. After around an hour at Poundland, we decided to move to our next target – the British Heart Foundation shop on Bold Street.

Here we engaged with more members of the public, pointing out that the BHF and many other charities take part in workfare. Many interested people approached the picket and were shocked at the British Heart Foundation’s role in the work programme. After around 45 minutes here, we began to run out of literature to hand out, such was the uptake in the first two locations. We decided to move onto the next target – Argos.

There was again lots of interest from the passing foot traffic at Argos, including some who engaged with us very positively and politically. We even had a homeless woman across the street join in with us, telling the public that workfare was a threat to everybody and not just the unemployed, with the aim being to drive down wages and worsen working conditions for those already employed, or just laying them off in favour of free workfare labour.

All in all, the day was very successful. Following a couple of recent washouts at planned pickets in the city, the attendance was as good as could be expected. Lots of literature was handed out and there was huge interest in the pickets at each location, with handfuls of people at each store refusing to go inside once they’d heard our message. To see the kind of success we saw with Holland & Barrett, we need to keep the momentum going. More pickets are planned for all of the above locations and more. Make sure you get along and let the parasites know – if they exploit us we will shut them down.

This article was published on 10 September 2012 by the SolFed group in Liverpool. Other recent articles: