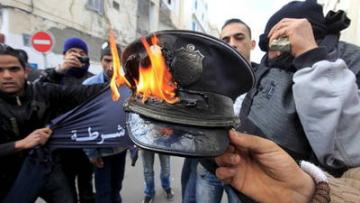 The action of the people in Tunisia is a strong signal in the global struggle against capitalism and the state, it shows that resistance can operate autonomously (in a self-organised manner without leaders nor political parties) to drop the worst dictatorships.

We hope that this struggle for social justice and freedom will extend, we hope the Tunisian workers and youth will develop their own decisions’ tools, despite all attempts of politicians and religious hijacking and divisions that may occur.

Only the autonomous; self-organised resistance of the exploited people, united in the perspective of class struggle can successfully oppose the barbarity of the system.