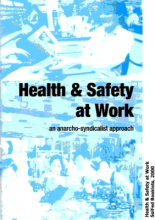 This pamphlet is based on a course organised by North & East London Solidarity Federation called "Organising for Health and Safety" back in 1997. Part 1 introduces the idea of health, safety and welfare standards at work, and places them in the context of capitalism. Part 2 suggests ways of finding out about and taking up health and safety issues. Part 3 details some common problems and definitions, and Part 4 provides a case study from the Norwich and Norfolk Solidarity Federation, and introduces the idea of union support surgeries. Part 5 compares and contrasts modern trade unionism with anarcho-syndicalism as advocated by the Solidarity Federation, and argues for social revolution. Finally, there are appendices on tactics, basic rights and information of practical use. 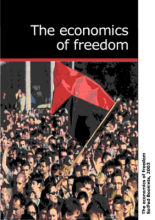 This pamphlet has been written by a group of people in the Solidarity Federation. We are actively involved in taking direct action for a better world. However, we are also interested in what this better world might be like and how it might work. In the current world of US-led terror against terror, corporate cronyism and corruption, and widening global and class inequality, we all want and deserve better. The Solidarity Federation is the British section of the anarcho-syndicalist global movement. Anarcho-syndicalism is about direct democracy – democracy from the bottom up - no party politicians, corporate managers or union leaders. Direct democracy means decisions are made by all those present. Hence, we cannot be prescriptive about what a future, decent economy might work like. It will be decided by the people there at the time. Hopefully, it will happen soon, and everyone will be involved. However, in the meantime, it is rather a cop-out to simply say, “we'll sort that out later” and then, fall back on abstract principles or vague concepts. So, we thought it would be useful to develop a detailed model (but not a straightjacket) of how it could work. This is the result. 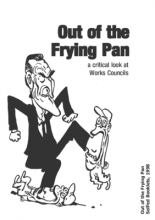 Works Councils are coming to Britain. But what are Works Councils, and what will they mean for working people and trade unions? Are the TUC unions right to welcome the changes in labour relations which Works Councils will bring? Works Councils, far from empowering people, act as a tool by which management can control and pacify people at work. The truth behind Works Councils is exposed here through the views of workers in France, who have witnessed their failure at first hand. The message is clear; there is nothing to be gained and much to lose from the introduction of a Works Council system in Britain. Out of the Frying Pan is a new, critical analysis of Works Councils and a look ahead at a real future for organising and fighting back in your workplace.

(as amended by National Conference, April 2012)

As a revolutionary union initiative, the Solidarity Federation seeks to develop into a revolutionary union (anarcho-syndicalist union). We see this as an essential forerunner to such a society. To this end, SF seeks to create a culture of militant opposition to the bosses and the state, controlled by the workers involved. This means picking fights and winning victories, however small, in order to build confidence and a culture of militancy and solidarity which can take on bigger fights.

Solidarity Federation (SolFed) was formed in March 1994. It is a federation of groups across England, Scotland, Wales and Ireland. Everyone involved is helping to build a non-hierarchical, anti-authoritarian solidarity movement. The basic foundation used for doing this is the Local group.