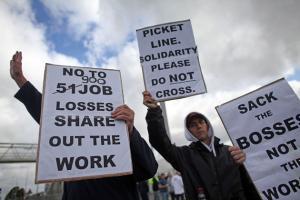 Even the government admits that this will lead to the loss of half a million public sectors jobs. And as the British economy is so dependent on the public sector, again, according to the government’s own figures, there will be at least another half million jobs lost in the private sector. These job losses will be felt hardest in the old industrial heartlands of Britain, places like Scotland, the North of England and Wales, that were decimated by the Thatcher government.

At that time the government claimed that new high-tech industries would provide the jobs lost in the traditional industries such as mining and heavy engineering. This never happened. Instead jobs were created in the public sector and as a result as many as 60% of jobs today in the old industrial areas are in the public sector. If the government is allowed to get away with its planned cuts, these areas will revert to being industrial waste lands with massive unemployment, along with all the associated social problems.

Some of the hardest cuts will fall on the poor, the unemployed and those unable to work due to ill heath. The government, as part of the cuts, will be taking an axe to Britain’s already crumbling welfare system. After months of rhetorical attacks on “benefit scroungers”, the government has cut benefits by £7 billion a year – on top of the £11 billion a year it cut earlier this year.

For people on welfare benefit and those already in poverty, life will get much harder. Disabled and ill people will have money snatched away. Benefit cuts mean that 18 million households will be at least £1,000 worse off each year. Attacks on housing benefits will drive many from their homes. Workers will be forced to work for longer for their pensions, and will pay more contributions but get less when they retire.

The effects of privatisation will be felt by students and workers alike. As the fees charged to students rise, working class children will inevitably be put off attending university. This will make university education even more the preserve of the middle class. The cream of Britain’s universities, places like Oxford and Cambridge, are already dominated by the children of the middle and upper classes. These universities will be able to demand ever higher fees reducing still further the already pitifully small number of children from poor families who attend Britain top universities.

The privatisation of universities will have a profound effect on workers. The government has already made it clear that those universities that cannot attract  enough fee paying students to make up for the 40% cut in their grants will be allowed to go bankrupt with the loss of thousands of jobs. In response to the cut in government grants, universities across Britain have already begun to cut jobs in order to drive down costs, while university workers’ pay has been frozen for the second year in succession.

Needless to say the savage attacks on the workers are not being applied to the rich. The government is still pouring money into the banks, a large chunk of which ends up boosting the pay of the bankers. This year the supposedly bankrupt banks will be awarding their top managers a total of £7 billion pounds in bonuses. The government also intends to slash corporation tax.

Taken together the government’s planned cuts to public spending represent the biggest attacks on the working class since the 1920s. Then, the cuts helped bring about the 1930s slump and there are many who argue that the shear scale of the cuts will bring about a “double dip” recession leading to yet more job losses.

The next four years are going to be critical for the British working class but at this point it’s hard to predict how much organised resistance there will be to the cuts by workers. The British working class has still not recovered from the defeats inflicted upon it by Thatcher and the massive economic changes that have taken place in Britain over the last 30 years. The reformist unions may number some 7 million workers but they are weak and pathetic. The unions have talked about organising strike action but their only response to the cuts so far is to organise a national demonstration in March next year!!!

But in the last few weeks there have been signs that workers will not be prepared to wait around for the reformist unions to betray the working class. Though still small scale, there have been numerous demonstrations organised across Britain. There has also been a grass roots campaign organised against the mobile phone company Vodaphone after it was announced that the company would not have to pay over £6 billion owed to the government. It is through such acts of direct action that the government cuts will be defeated, not through the passive demonstrations organised by the reformist unions.