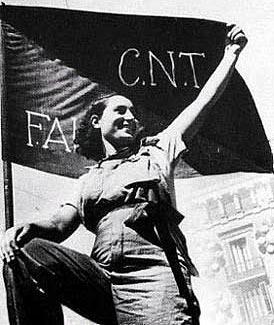 To mark the anniversary of the Spanish Civil War, Calderdale Solidarity
Federation will be hosting an afternoon of film, discussion and archive
material from our Spanish sister section CNT-AIT.

In July 1936, during the period of the tumultuous Second Republic, military
conspirators including General Franco rose up against the government and
attempted, through their military coup, to install an army-led regime that would
"restore order". Workers and loyal troops repelled the coup d'état in many
towns and cities and by the end of July it was clear that the rising had failed:
half of Spain had not fallen to the military. In this half of Spain, workers'
organisations, especially the anarcho-syndicalist CNT, set about not only
defending themselves against the military and the machinations of the
Catholic Church, but also put the long desired libertarian communist or
anarchist revolution into practice. Factories were taken over by the workers,
fields were farmed collectively, rationalist schools taught girls and boys side
by side, unhealthy workshops were closed and abortion was introduced. The
fight against fascism became the revolutionary struggle to create a new
economy, a new mode of distribution and a new way of relating to one
another.
How did Spanish anarchism achieve this? Why did this revolution last less
than three years? What is its legacy today?

This article was published on 30 June 2013 by the SolFed group in Calderdale. Other recent articles: