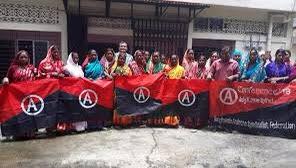 Recently, the world has been shaken by the death of George Floyd, brutally killed by the police, unarmed, he pleaded for his life as the police suffocated him with their knee on his neck. This is just one of 1093 documented cases in the USA this year of police killing American citizens, more deaths go unrecorded. An epidemic of police violence, white supremacy that is rooted in the legacy of slavery, segregation and the de-humanisation of African-Americans by the state and its racist allies.

After this event we have seen mass protests in the USA and across the world, clearly commendable, even more commendable are calls for de-militarisation, defunding and abolition of the police. What is less commendable, is how companies have co-opted and appropriated this movement with statements of ‘solidarity’ with the Black Lives Matter movement. This is often a thin veil for exploitative practices these companies are engaged in. Solidarity from all sections of society is essential if we are to overcome police brutality, white supremacy and systemic racism, but half-baked, lazy and patronising attempts at ‘solidarity’ from companies gets the movement nowhere – does not free a single prisoner, does not build the confidence of the anti-racism movement and does not amount to a refutation of the logic of domination, othering, exclusion, subjugation and exploitation that constitutes the racist system that perpetuates white supremacy.

Yorkshire Tea, the British tea brand has won praise when their Twitter account ‘shut  down’ a racist claiming to boycott the brand due to their ‘support’ of BLM.

The twitter user tweeted “Dead chuffed that Yorkshire Tea hasn’t supported BLM” to which the brand replied “Please don’t buy our tea again. We’re taking some time to educate ourselves and plan proper action before we post. We stand against racism. #BlackLivesMatter”. This was followed by The Guardian’s favourite pseudo-socialist, Owen Jones stating “That’s it, I’m switching from PG Tips”. This was then followed by PG Tips sniffing out the loss of public credibility and more so, profits and having to get involved with this online signalling of anti-racist virtues. PG Tips replied to another dismayed racist by tweeting “Yes it does suck, Pamela. If you are boycotting teas that stand against racism, you’re going to have to find two new tea brands now”.

If you know nothing of the tea industry and it’s hyper-exploitative, neo-colonial nature then it is easy to heap praise on these brands taking a stand’ against racism. But these Tea brands are not innocent – just like the UK isn’t innocent when it comes to racism of all forms.

The reality is shocking. Most tea in the world is produced in India and Sri Lanka, with workers toiling in terrible working and living conditions, kept under strict control by their exploiters. “The joint investigation by Radio 4’s File on Four and BBC News in Assam, north-east India, found workers living in broken houses with terrible sanitation. Many families have no toilets and say they have no choice but to defecate amongst the tea bushes. Living and working conditions are so bad, and wages so low, that tea workers and their families are left malnourished and vulnerable to fatal illnesses. There was also a disregard for health and safety, with workers spraying chemicals without protection, and on some estates, child labor being used.” (BBC News, 2015). The same producer of tea described in this quotation, McLeod Russel, supplies to PG Tips, as well as other British favourites Lipton, Tetley and Twining.

Dire working conditions are one thing, but the wages of workers is equally shocking. In the Northern Indian State of Assam “Tea workers in Assam earn 115 rupees a day, just over £1 ($1.50) , significantly below the minimum wage (177 rupees in Assam).” As housing is part of the job, employers justify wages being incredibly low, and so workers are kept in a perpetual state of malnutrition, exploitation, social immobility and extreme wage-slavery. Make no mistake, this is modern slavery – workers have no other choice but to drudge through miserable working conditions, miserable pay, miserable living conditions and suffer tremendous mental and physical health issues as a result. After, in the same year as the aforementioned article, two Tea workers in India died of starvation, a research team from The Global Network for the Right to Food found high levels of malnutrition and human rights violations” among the workers not only in the closed tea gardens of North Bengal but also in Assam” (The Indian Express, 2015).
In addition, child labour is abundant in the tea industry of India, which whilst the production is based in India – the money, the demand, the employers are mostly based in Europe and the UK. Whilst this inhumane treatment of workers may seem far away, the perpetrators of this hyper-exploitative industry are very close to home. The UN’s rules on child labor state that no child under the age of 15 should work full-time, however, under the Assam Company several recent investigations have found children of 14 years and younger working at these estates, this was when the company knew that researchers were coming, hell knows what the conditions were like and how young the workers are when there is no critical presence there to oversee working conditions.

What this all points to is several things. Firstly, working conditions on Tea estates in India and Sri Lanka, and much of south-east Asia are dire, inhumane, unhealthy for the body and mind, hyper-exploitative and form a modern-day slavery which the relatively well-off drinkers of tea in Europe could not even imagine. Secondly, the treatment of workers as a second-class citizens or as less-than-human by European and American tea companies amounts to an economic arena of neo-colonialism in the 21st century, based in the structural privileges of white supremacy, the Eurocentric worldview and as (particularly for Brits) an adaptation, renovation and perpetuation of the economic domination and subjugation of Indian people under the protection of a neoliberal orthodoxy which the British, EU and Indian states are complicit in.

Thirdly and lastly, calls from (to use an internet term) ‘woke’ companies allying themselves with anti-racist and social justice causes are shallow, insidious, patronising and damn-right hypocritical. We publish this message today because capitalism has a tendency to absorb radicalism and solidarity of social movements in order to stay relevant, to be ‘on the side of the people’, to show how enlightened and egalitarian they are – when in reality – this is just a sham designed to increase profits, hide exploitation and reduce class consciousness, the primary incentives of any capitalist institution.

For working conditions, pay, living conditions we hope that workers unionise, but we know very well that employers will resist any attempts of unionisation with tremendous violence at times, and so we offer our solidarity to tea workers exploited by the ruling class and its institutions, we look to examples of unionised tea-workers in Bangladesh, who have managed to form the Bangladesh Anarcho-Syndicalist Federation (BASF) despite all the odds against them and united in class-solidarity against their exploiters to organise for better working conditions, pay and a better life.

BASF starting from 2014 sprang out of a 23 member committee committed to organising in the country according to Anarcho-Syndicalist principles, formerly a Marxist-oriented organization that became alienated, withdrawn and concerned about the highly authoritarian nature of the former Soviet Union and China. Having learnt most about anarcho-syndicalist principles, history and theory through articles found on the internet and having to read through these works in foreign languages shows both the commitment to the principles and the eagerness of tea-workers in BASF to organise more effectively and build a strong movement of empowered workers operating on the maxim of ‘An injury to one is an injury to all’.

In 2018, BASF reported health complications stemming directly from unsafe working conditions and especially indiscriminate use of pesticides in 156 tea gardens across the country, symptoms the workers have suffered include “red eyes, chest irritation, and hand and foot blisters” (TheAnarchistLibrary, 2018) according to one anonymous worker. As with many cases across the world when the interests of capital overrides the safety of workers and labour laws put in place to protect workers from dangerous conditions the capitalists and foreign-investors, along with state authorities completely disregard these laws: “According to Bangladesh Labour Law 2006 (amended), garden authorities need to ensure the workers use safety glasses, hand gloves, masks and appropriate clothing for personal safety. But the labourers complained that the authorities are not bothered about the law, and the situation is the same in all the gardens across the region”.

The arrogance, lack of empathy and complete disregard of labor laws displayed here form the tea-garden owning capitalists, the ineffectiveness of the country’s major trade unions in fighting for better working conditions and pay is proof enough of why BASF was formed with Anarcho-Syndicalist principles of direct action, mutual aid and solidarity, let down by the supposed ‘radicalism’ of Marxist-Leninist organisations and by the inadequacies of the traditional unions and of course the capitalist state, the only logical movement forward was the formation of BASF, organising amongst themselves and for themselves but in complete solidarity with workers across the world facing exploitation, poverty and ill health caused by the capitalists inhumane disregard of workers conditions.

Since their growth in the past 6 years BASF have gone on strike for a raise in wages from 85 Tk (79p) per day to 200 Tk (£1.86) per day, against unsafe working conditions and against the extreme poverty they face in the country. BASF urgently needs international solidarity. We offer our solidarity and look forward to hearing more about the growth of anarcho-syndicalist organising and pushing back against the interests of state and capital.
We also urge tea drinkers in the UK and elsewhere to be aware of where their tea comes from, to understand the manipulative and deceitful acts of ‘solidarity’ with BLM, that all capitalist institutions, whether private enterprise or state-operated have the same aims, have the same lack of empathy, the same disregard to humanity, however much they try to disguise this through their sudden awakening of ‘solidarity’.

This article was published on 25 July 2020 by the SolFed group in Bristol. Other recent articles: