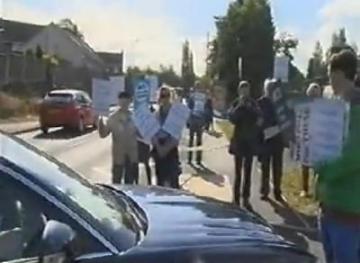 Or, standing in front of cars for Full Communism

Later this year, teachers in the NUT and NASUWT will take part in a series of one-day strikes against attacks on their pay, pensions and conditions, not to mention a raft of pro-market, anti-pupil polices flying out from the DfE. Until now, the universally hated Big G (the four letter Big G, not the three letter one, though Mr Gove is prone to get confused ) has been able to swan about the country opening academies, praising private involvement in education and pontificating on the future of the curriculum (with the prime purpose of remolding it in his utterly discredited, Victorian vision).

Last week however, Mr Gove ran into a small obstacle. A single protester stepped out into the tarmacked entrance Mr Gove’s ministerial chauffeur had elected to use to deposit the gitwizard inside the 8 foot-high gates of Gloucester Academy, and succeeded in stopping the vehicle. When a member of the school’s management consultancy/security team (blurred lines between these) approached and politely uttered the immortal words “I’m afraid I’m going to have to ask you to move”, the unstoppable polite reply was ready and waiting “You’re very welcome to ask, but I’m afraid to inform you that I don’t intend to”. Meanwhile around 30 retired members of local NUT branches, Unite Community, and anti-cuts groups and SolFed members, previously picketing at the main entrance to the academy, began to surround the car with placards and banners.

The car began to reverse.

“And don’t came back,” yelled another.

And away he went. Sadly, not far. There were protesters waiting for him at the other entrance, however, and all in all Mr Gove was delayed by 20 minutes. Which, coincidentally, is exactly the amount of time eight journalists were given with him to ask him questions once inside the school. And not just any questions. Journalists were given a list of questions they would not be allowed to
ask. And were not allowed to accompany Mr Gove on his tour of the school (presumably following the numerous heckling/finger flipping incidents which have dogged his efforts to engage with teachers and pupils alike). This is fully transparent Open Government , after all.

Despite hostility from security, the impromptu blockade and protest was well received by local teachers, with one saying "This sort of action is great. Gove is hated by teachers, and a good few pupils. His policies have smashed teacher morale and are aimed at pushing schools the same way as the railways and energy companies - disaster for service users and workers in the name of profit for a few. Leaving aside his hatred of teachers, he's been clear that he wants to push pupils education back to the Victorian era, with a dull, exam based, fact driven and in places, xenophobic curriculum. He's not welcome in our schools and hopefully this protest has helped to show that."

This was only a small action, but hopefully one that served two important purposes. Firstly, to spread the idea that pupils, teachers and concerned members of the community can, and should take direct action to reclaim their education system from a man hell bent on nothing but leaving it open to the mercies of the free market. Secondly, and only a little less importantly, the demo will have shaken Gove and left him feeling exactly how he should feel when in close proximity to a school - scared, alone and unpopular. Let's hope this action kick starts a wave of school-based resistance to Gove that will see him hounded, harassed and blockaded from our schools and colleges.

This article was published on 26 September 2013 by the SolFed group in Bristol. Other recent articles: