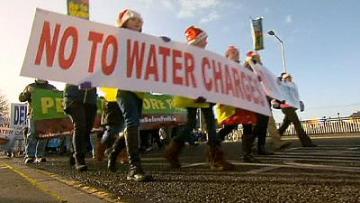 From the December issue of the Leveller, publication of Belfast SolFed.

The mobilisation, anger and direct action of working class people opposing water charges in the south has got the government on the run. Much is made of a brick thrown at Garda and Joan Burton being trapped by a ‘mob’ in her car during a water charges protest. Little to nothing is said about police violence against protestors or the devastating impact this charge will have on poor working class families. Families already devastated by attack after attack upon them by bosses and government in the name of ‘austerity’.

Tens of thousands took to the streets on 10th December. making it clear that they will not pay water charges. They were prevented from reaching the Dail by a government that cowered behind barricades and police. The government, unsurprisingly, has shown itself to be not only completely out of touch with working class people but also extremely callous in regard to their plight. A plight that has gotten worse and worse in the name of ‘austerity’ as the rich have got richer.

The government and media have, largely without success, resorted to a smear campaign.

On the same day in Belfast a solidarity demo was organised in support of our fellow workers in the Republic of Ireland. We were also showing that resistance to water charges in the north has not gone away.

Around 35,000 water meters have been installed here since 2007. People have mobilised to face down the threat of water charges in the past. The building of mass campaigns of non-payment, such as the We Won’t Pay Campaign mobilised working class people from all across Northern Ireland. It was the growing strength of working class resistance, based on mass non-payment and organised street by street, community by community, that forced Stormont to back off then. It will defeat them again.

But more than this, more than ever, we need to smash the rotten capitalist system. Stormont, the Dail and Westminster are ruling on behalf of the rich, its time to organise and fight back.

This article was published on 16 December 2014 by the SolFed group in Belfast. Other recent articles: