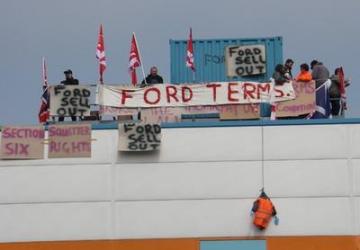 Workers at car parts manufacturer Visteon in Belfast, Enfield and Basildon occupied their factories on Wednesday 1st April, after they were given six minutes’ notice of closure and told to leave immediately. 565 jobs have been lost at Visteon plants across the UK. Left with no alternative, the workers staged a spontaneous sit-in, first in Belfast then spreading to the other two plants.

Many of the workers had worked at the Enfield factory, originally owned by Ford who set up Visteon and transferred the factory operations to it in 2000, for many years. Ford had agreed that the workers transferred to Visteon would receive the same conditions as other Ford workers, but the bankruptcy of Visteon UK left them with the legal minimum redundancy payments and pension compensation. Workers demanded that the Ford redundancy and pension terms they had been promised be honoured.

The factory occupation was a headache for their union Unite, the largest social-democratic union in the UK. The administrators of Visteon UK, KPMG, got a court order to evict the occupiers and took legal action against Unite. Union leaders sought to protect themselves and the union’s corporate interests, and “advised” the workers to leave the factory or face arrest, jail, fines and a criminal record.

The union agreed with KPMG that workers would leave the factory in Enfield at midday on Thursday 9th April and its general secretary flew to New York to meet with the parent company to “negotiate” the end of this dispute by that date. Workers complied with union advice and vacated the factory in return for talks with the company at a secret location on Tuesday 14th, but maintained a 24-hour picket to prevent removal of equipment in the interim.

Local trades unionists, anarchists and community activists from Enfield, Haringey and the rest of London supported the occupation. They argued against vacating the factory as its possession was the workers’ best bargaining tool, but union officials held sway over the workforce. The occupation did win “talks”, but continuing it might have won the workers’ demands in full. However, these initial negotiations produced an offer rejected as “insulting” by the workers. In the present crisis this situation will recur, it is vital that the lessons are learned and that in future workers organise to resist pressure from union officials to accept “fair” settlements.

Ford UK plans to transfer some of its production to Bulgaria and Turkey and has announced redundancies. Shutting down Visteon UK is part of Ford’s longer term plan to outsource manufacturing to those parts of the world with “employer-friendly” labour laws and conditions. Directors of Visteon UK are also rumoured to be setting up a replacement company to continue to supply Ford with car parts, having wiped its debts and dispensed with its existing workforce through bankruptcy. On April 28th, management at Linamar, a former Visteon plant in Swansea, announced they were sacking the Rob Williams, the Unite convenor there. He has been active in supporting the Visteon workers and in fighting against redundancies in the Swansea factory. There was an immediate walkout by the workers there and, when management called police to forcibly remove him, the workers surrounded his office and stopped them. This action has forced the management to negotiate, though the threat of sacking is still there.

Workers from the Belfast Visteon plant where the occupation is still ongoing have been touring the country and visiting other sites of struggle, including the Lewisham Bridge school occupation, and the Linamar site in Swansea.