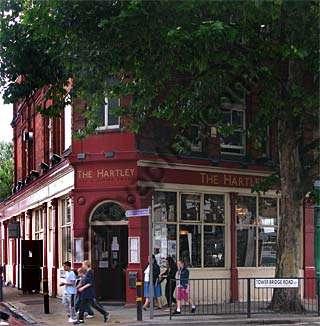 A pub worker and South London SF have together won 6 weeks in stolen wages after a campaign of direct action and threatening pickets of a London pub. Laura was employed by ‘The Hartley’ pub in South London. She was let go after she refused to work because she hadn't been paid for 6 weeks - owed over £700 dating back to mid-September.

Laura got tired of waiting and spoke to South London Solidarity Federation (SLSF). The first step of the campaign was for Laura and members of SLSF to deliver a letter demanding her back-pay on Friday 19th. While waiting for action from the boss, Laura organized a mass phone-in of her employer with her friends and family. The boss was clearly rattled:

But still no money came, despite promises and assurances, and still the owner ignored Laura. So the calls and emails continued.

By the Sunday evening the owner, still threatening legal action, was blaming everything under the sun for not paying his employees properly. He promised Laura what he owed her in full the next day. The next evening Laura did receive some money, but it was only half the amount. So SLSF called a picket of her former workplace and there was no let up in calls and emails.

Laura received the rest of the money on Wednesday evening, after 5 days of calls and emails from the people around her and the support of South London SF. Credit is to her for standing up for herself - she got what she was due through her own self organization and the support she was able to mobilise.

We know that wage theft and other dodgy practices are widespread among desperate greedy bosses. Congratulations to Laura for winning her back pay! We are keen to hear from anyone else who has a similar problem and wants to do something about it. Don't assume that there's nothing you can do - get in touch and we will talk through your options.

This article was published on 27 November 2011 by the SolFed group in South London. Other recent articles: