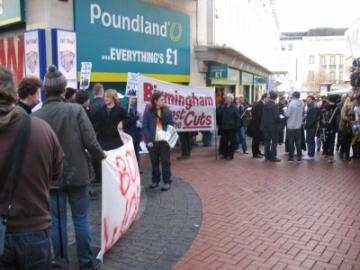 About 60 people in Birmingham today protested against the government’s Workfare schemes, which see people forced to work for up to 6 months in order to keep their benefits for already obscenely profitable companies. Boycott Workfare had organised March 3rd as a national day of action, including London, Brighton and Belfast.

The Birmingham demo began at Poundland, whos headquarters are in the midlands. Poundland, and other companies on the scheme have been using free labour around the country. Protestors believe that because these companies are essentially refusing ro pay for labour, they are driving down real wages for all their employees, as they know they can get people on Jobseekers to work,a nd won't have to pay them.

Poundland said last week that they announced that they would withdraw from the (mandatory) Work Programme, but would continue to participate in the (technically voluntary) Work Experience Scheme.

After a while at Poundland, the protest moved to McDonalds on Cherry Street. Activists from IWW and Solidarity Federation in addition to the SP and SWP, as well as anti-cuts protestors and many non-aligned individuals continued to distribute flyers and papers highlighting the exploitative nature of Workfare.

A brief occupation of McDonalds was held - about 30 protestors entered McDonalds chanting anti Workfare slogans and handing out information leaflets.

The Workfare campaign has been a PR disaster, with companies already pulling out left, right and centre. The campaign against Workfare will continue so long as participating employers continue to exploit the vulnerable unemployed and refuse to pay workers for their labour.