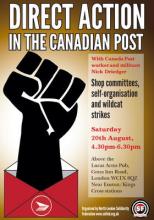 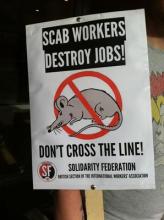 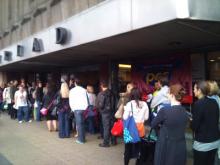 On Tuesday 7th and Wednesday 8th June, PCS members in HM Revenue & Customs staged a series of walkouts. This was in opposition to a harsh new sickness policy being imposed upon staff. Members of Liverpool Solidarity Federation were amongst those who turned up on the picket lines to show support.

The action took the form of an hour's walkout at 4pm on Tuesday, a 10am "walk-in" on Wednesday, and a two-hour lunchtime walkout on the same day. The strikes took place across the country, with a high degree of support and disruption reported in most places. On Merseyside, the action was concentrated in the City Centre and in Bootle - both of which are home to a high number of government offices. 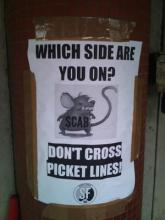 On Saturday 14th May, Liverpool Solidarity Federation - along with members of Anarchist Federation and UK Uncut - held a picket outside a government office in Bootle. This was in support of PCS union members who were facing victimisation for upholding an overtime ban in defence of their jobs.

PCS reps have been on picket lines most Saturdays since before Christmas, reminding people of the ongoing national action. Overtime is being used as a way of masking job cuts, as well as speeding up the current workload so as to meet the "cliff face" at which job cuts can be made faster. 96% of staff in the building, not just union members, support the ban - but a tiny and vocal minority remain determined to stab their colleagues in the back for a quick buck.