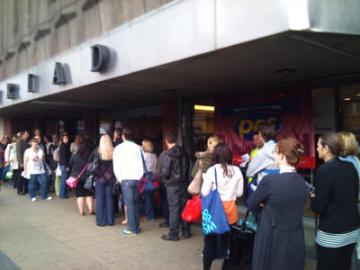 On Tuesday 7th and Wednesday 8th June, PCS members in HM Revenue & Customs staged a series of walkouts. This was in opposition to a harsh new sickness policy being imposed upon staff. Members of Liverpool Solidarity Federation were amongst those who turned up on the picket lines to show support.

The action took the form of an hour's walkout at 4pm on Tuesday, a 10am "walk-in" on Wednesday, and a two-hour lunchtime walkout on the same day. The strikes took place across the country, with a high degree of support and disruption reported in most places. On Merseyside, the action was concentrated in the City Centre and in Bootle - both of which are home to a high number of government offices.

In Bootle, there was around 80-90% support. Litherland House had just four people remaining at work as their colleagues stood up to the bosses, whilst St John's House and The Triad both had huge queues of people blocking the road for the "walk-ins." At a strike rally, union reps talked about how this struggle was connected to that over job losses and attacks on pensions, as well as drawing the links with the local community and the knock-on effect cuts would have on service users, benefit claimants, and private sector workers. Leaflets handed out at the rally urged public support for this action and the coming 30 June strikes.

In Liverpool, a number of supporters joined the action at the Queen's Dock office. The site has been earmarked for closure next year, with workers there facing highly disruptive moves or possible redundancy, and there was a determination amongst those taking part that now was the time to fight.

Liverpool Solidarity Federation expresses its strongest support for the staff who took action at HMRC as well as for all the public sector workers facing attack. Their fight is our fight, and only by sticking together as a class can we hope to fend off the advances of the state and capital.

This article was published on 8 June 2011 by the SolFed group in Liverpool. Other recent articles: