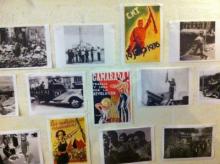 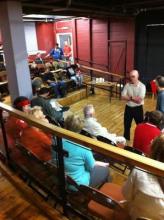 After sitting in the files for two years this hour-long talk in Manchester by a member of the Spanish Confederación Nacional del Trabajo has only just been formatted and uploaded to the web. In it, the formative years of what would become the largest anarchist organisation in history are described in detail, from 1840 when socialist ideas first started to penetrate into the Iberian Penninsula, up to its establishment as one of the biggest players in 20th century Spanish politics, one which would influence the world in unexpected and far-reaching ways.

A member of Brighton SolFed was interviewed on the Novara show on Resonance FM last week. The hour long show talks about the history and theory of anarchism and anarcho-syndicalism, the differences with Marxist ideas, the occupations at Sussex University, the current anti-cuts movement and more. Listen using the player below (requires flash).

The turn of the year saw the 85th anniversary of the IWA’s founding in Berlin in December 1922 and January 1923. Here, we look at the struggle to establish an (anarcho-)syndicalist International in the 50 years between the demise of the 1st International and the events in Berlin

September 10th marks the 50th anniversary of the death of Rudolf Rocker, an occasion which prompted the Argentinian anarchist journal, La Protesta, to write: “With the passing of the old and dearly loved master the cycle of a brilliant generation of anarchist thinkers and militants is closed.” Here we look at some of Rocker’s contributions to the working class movement 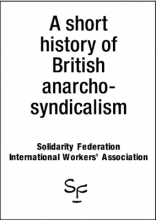 Anarcho-syndicalism is a distinct school of thought within anarchism. It seeks to abolish the wage system and private ownership of the means of production which lead to the class divisions in society. The three important principles of anarcho-syndicalism are solidarity, direct action and workers' self-management. It focuses on the labour movement more than other forms of anarchism and looks to unions as a potential force for revolutionary social change, replacing capitalism and the State with a new democratically self-managed society.