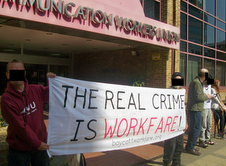 Here are two members write ups of the pickets Solent SF were involved with last week!

On the 2nd of April 2012 members of the CWU union and with SolFed members including a Solent SolFed member, IWW and boycott workfare members descended on to the Communication Workers Unions Headquarters in Wimbledon London to protest about the use of the DWP work experience scheme at Royal Mail offices throughout the UK, because the CWU have decided to support this “Government” scheme instead of supporting unemployed workers get proper paid contracted work. We duly set up our protest picket outside the front entrance, unfurled our banners and flags and started handing out four hundred leaflets warning people about what was happening and how the Communication Workers Union was working with Royal Mail to exploit workers.

The CWU claimed in a communication to it`s members that there would be NO sanctions used to coerce unemployed workers but did not get confirmation from DWP that this was true and in fact only spoke to Royal Mail about the details of this scheme despite Boycott Workfare and their own members asking CWU Headquarters for written confirmation from the DWP and then warning the CWU that this was not the case and that the Royal Mail work experience scheme did indeed have sanctions attached that could be used to coerce unemployed workers into taking a four week placement.

This of course was and is totally unacceptable to the majority of CWU members as well as SolFed, the IWW and Boycott Workfare.

An interesting thing of note was the use of a private security company to guard the entrances of the Union building at vast expense when all they had to do was check the details of the scheme and pull out as soon as it became clear that workers would suffer because of their actions in agreeing to it.

A worthwhile day and I am sure we will be back

Members of Solent Solfed together with IWW, Portsmouth Anarchists, Wessex Solidarity, Bournemouth Uncut and Surrey/Hants Afed assembled at the Triangle and picketed the bogus medicine show. 10 in all coming from as far afield as Bridport, Weymouth, Southampton and Fareham; later we were joined by a couple of SWP. A letter was handed to staff explaining the action along with a copy of Solfed’s Workfare Pamphlet.
The manager showed up: “are you allowed to be here?” What? On a pavement in a shopping precinct on a Saturday! He claimed to be ‘creating jobs’ then bemoaned the fact that we were going to cost him his £59 bonus; in desperation he threatened to sue us for copyright as we’d given out some of the Johnny Void flyers. We were all set to move on to the next one when we found out he’d called the plod, falsely accusing us of blocking the doorway and swearing on the megaphone, so we had to hang around on principle. “Who’s in charge?” – Where do they get it from? Our letter now in the hands of Babylon we can all expect some extra traffic on our web sites.
As time was cracking on the group then split, a second H&B was picketed while Bournemouth uncut occupied Vodafone. Having run out of fliers we reunited in top shop on our way to the pub; we brightened up when the guvnor announced security were going to “remove us using force” but they evidently didn’t fancy it and called plod again. I think it was the same copper; they all look the same to me.

We had the usual mixed reaction but got rid of hundreds of flyers and had some interesting conversations. There’s still room for raising awareness as some folk know nothing about it.

This article was published on 6 April 2012 by the SolFed group in Solent. Other recent articles: