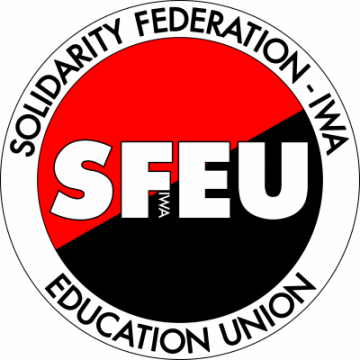 The University and College Union (UCU) is continuing its action in defence of fair pensions and fair working conditions. Staff will be on strike in February and March in relation to both the pension dispute and the “Four Fights” (pay,  workload, casualization, structural inequality).

The Solidarity Federation Education Union (SFEU) supports this action because…

● University lecturers’ pay has fallen by 20%.

● One third of academic staff are on precarious, short-term contracts. ● Women university workers are still paid less than men, and more likely to be on these precarious contracts.

● BAME and staff who are People of Colour are also often paid less than their white counterparts.

● Pensions are under threat.

… as well as other issues relating to numerous things including gender,  race, disability, and rising workloads. Job insecurity and casualisation cannot be allowed to get worse, and change is needed to defend our universities and our workplaces.

The number of institutions able to strike has grown after re-balloting, and this will broaden the action under Action Short of a Strike (ASOS). But we need to push harder and consider radical measures such as an assessment and marking boycott, a tactic covered on the ballot papers as potentially part of ASOS.

We also believe that the division of our workplace into academics, academic support staff, catering and admin workers weakens us all and allows our leaders to effectively implement a “divide and rule” strategy which undermines our response. SFEU actively advocates a unitary union that cuts across these divides, bringing all workers together in an independent union that has no ties with political parties.

● Solidarity Federation is an anarcho-syndicalist union made up of workers of all kinds, including the higher education sector, and those in precarious work, or who have no work at all.

● We organise together to fight back against exploitation by bosses and landlords through solidarity, direct action and practical support.

● In practice, this means supporting large-scale disputes like this one, but also  smaller scale issues like wage theft and stolen rent deposits.

the union - get in touch with your nearest Local at www.solfed.org.uk. You can also find us on Twitter, Facebook, and Instagram. If you are a student, academic  staff, or involved in any aspect of the education sector, feel free to get in touch  with our education sector union, the Solidarity Federation Education Union, at  leedssolfed@gmail.com