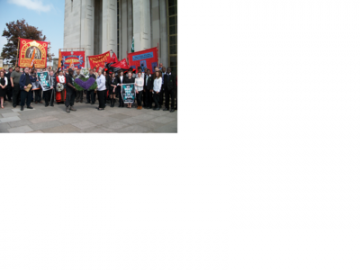 Members of SolFed who live and work in Waltham Forest attended the Workers Memorial Day rally at Walthamstow Town Hall, the council's administration centre of a borough that saw two deaths last year.

The event was in particular rememberence of two workers killed in Waltham Forest in the previous year. Andrezej Rokita, 55, from Poland, was killed by falling materials while working at M & M Contracting Ltd., Midland Rd. E10. Raymond Holmes, 60, from Essex, died when he was struck by a reversing vehicle, two days after Workers Memorial Day last year at Coppermill Water Treatment Works.

The rally saw speeches from a number of trade union officials, a local Labour MP, the Mayor of the borough, and a short play about health and safety at work (including the pressure of management to ignore regulations) by drama students from Leytonstone School. The Labour MP used the event to highlight his own supposed successes in maintaing health and safety legislation, despite the fact that he is part of the council that is passing massive budget cuts which will certainly impact on health and safety in the borough. The Mayor's insistence that the employers were just as important as the employees was particularly insulting at such a sombre rally, where the families and friends of the deceased were in attendence. SolFed members had no wish to cause upset to these fellow workers by disrupting the flow of events (although we would have supported them had they done so), so we bit our tongue and stood silent.

The United Nations say there are more people killed at work every year than those killed by war and that the majority of these workplace deaths are predictable, preventable and caused by negligent employers. In the UK the government is using the cuts to attack workplace safety provisions by undermining the Health and Safety at Work Act and the enforcement role of the Health and Safety Executive (HSE) and local authority EHO's. Deaths at work in the UK are sure to rise, and it is only the continuing self-organisation of our class that will help save lives at work - not allowing ourselves to be co-opted by trade union officials, who pander to local MP's and smug Mayors and allow them to speak at such important events of rememberance for the dead.

Remember the dead and fight for the living!

This article was published on 28 April 2011 by the SolFed group in North London. Other recent articles: