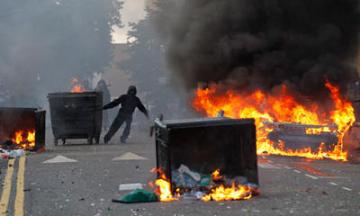 The following is the text of a leaflet that North London members modified from the Local's original statement, and was handed out by SolFed members in Deptford and Tottenham soon after the riots:

The fury of our estates is what it is, ugly and uncontrolled. But we all knew these riots were on the cards. Britain has hidden away its social problems for decades, surrounded by a brutal picket of cops. Benefits are being cut, social and advice centres closed, rent and unemployment is rising. People who have always had very little now have nothing, nothing to lose.

And even when the great and the good are put on notice, with the blatant police fix that is the Mark Duggan case, the media and politicians would have been as silent as ever if all that had happened was a vigil outside a police station.

It seems that it’s only when people fight back on the streets that the media feels the need to give it any sort of coverage — and then they only talk about the anti-socials, the people who’ll hurt anyone, never about the people who are just grabbing a bit of the wealth where they can because there’s never any chances otherwise.

There’s no talk about why the arsonists and muggers and gangs are how they are, or why the estates are they way THEY are, or what can be done about it not just today, but tomorrow and in years to come. These problems have been here as long as most of us can remember. They led to riots in the ’80s and ’90s — and things are getting worse.

There should be no shock that people living lives of poverty and violence have at last gone to war and that people are looting plasma TVs which will pay for a couple of months' rent. For many, this is the only chance they’ll get for a bit of economic redistribution as jobs go and the rich grab everything. Our entire society is based on worshipping wealth and stealing from the poor, if people choose to strike back and get some of the goods from Argos or Lidl, then we won’t condemn that.

But burning out shops with homes above them, muggings etc are an attack on our own and should be resisted because the end result is the same as when we let anyone else exploit and divide us — we all lose.

We say target the rich, the bosses and the politicians. They didn’t care about Hackney, Haringey or Lewisham yesterday and they won’t tomorrow. The politicians have already been talking crackdown, they just want to sweep the problems under the carpet again and label this as just “mindless criminals.” The rich are calling for more guns to be put on the estates — they’d happily start a civil war with us in the middle.

Don’t let them get away with that! We need to get together and start organising to make these people back down, to build a world where we run our society direct without bosses, landlords, poverty and police baton charges. Kicking off is just kicking off. We need to go further. We need to organise and take back the world that has been stolen from us.

This article was published on 19 August 2011 by the SolFed group in North London. Other recent articles: