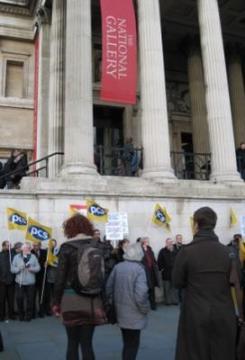 Today saw two members of the North London Solidarity Federation join striking gallery assistants and members of the public at a picket line rally at the National Gallery in Trafalgar Square. The strike, over budget cuts and staffing levels, was scheduled to last only two hours and was planned to cause disruption during the Gallery's busiest time.

SolFed members in particular made an effort to flier potential patrons, explain the issues behind the strike, and request they refrain from entering the museum for the duration of the strike. After spending some time at the Gallery itself, the strikers led a short march to the to the Da Vinci exhibition which was taking place next door.

Overall, striker morale seemed up and everyone we spoke to was glad to have the outside support. No doubt, strikes at high profile targets such as the National Gallery have the potential to put the effects of budgets cuts on full display, exposing the devastating impact austerity is having not only on cultural institutions, but on the working conditions of those who ensure such works are available to the public.

More information is available here in a press release from the PCS union: This article was published on 19 January 2012 by the SolFed group in North London. Other recent articles: