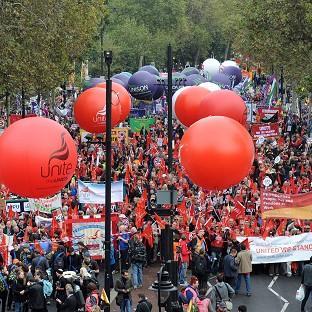 On the day some of us met up at Charing Cross station, in every corner you could see union branches and anti-cuts groups from up and down the country meeting up in the concourse.

We arrived at the Embankment to a sea of banner and as wemarched we met both people we knew from round London and people from all across the UK. We met Welsh comrades who'd come over night or on the 5am coach which made us feel pretty lazy.

The mood was positive as we trudged down to Embankment, when we reached Westminister we ducked out to have a look up and down the march. It was quite uplifting seeing banners from so many different workplaces and areas, inspiring to see so may of us out when sometimes the union branch or the local group can feel very isolated day to day. Being honest the only smudge on that was catching a depressing sight of the Wandsworth POA banner, a quick reminder not to place too much faith in the unity of the day.

Turn out was significantly down on last year, and it definitely wasn't as vibrant. However, its important not to be overly dismissive of big marches like this. Sure marching from A to B won't stop a single cut, but to be fair most people on the march know that. Despite the lower turn out I still know friends and family members who went who never do anything 'political', its still a big march that a large section of society can engage with and it still has the feeling of a show of strength, even if it can feel a bit diluted at times.

As with March 26th and indeed, the anti-war demos of nearly a decade ago, the trick is always to dodge the long list of speakers at the end and the tedious repetetive rhetoric the politicians and union leaders offer. We headed down to Oxford Circus to join the rest of the local at the Boycott Workfare protest which went pretty well. Then it was spoons via sam smiths (sadly not as cheap as it used to be). Overall, despite our mixed feelings it was still a good day out in central London, and now its back to the struggle on Monday morning...

This article was published on 22 October 2012 by the SolFed group in North London. Other recent articles: