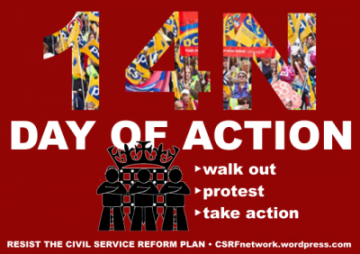 Officially called as part of a series of lunchtime protests against government attacks on civil service terms and conditions, the demonstrations have been timed to coincide with the European general strike happening today in Spain, Portugal, Greece, Italy and a number of other southern European countries.

It should be noted that SolFed has established contact with this particular group of workers in two ways.  One, SF is very close to one of the founding members of the CSRF.  Indeed, the network calls for many of the same tactics advocated by SF including workplace committees, communications blockades, and independent rank-and-file action.  Two, some of the same PCS members we stood alongside today have taken time from their lunch breaks to attend the Pret a Manger pickets which happen down the road and which have been supported and promoted by SF.

It seems solidarity is more than just a word to these civil service militants and North London SolFed look forward to further coordination, support, and mutual aid.

This article was published on 14 November 2012 by the SolFed group in North London. Other recent articles: