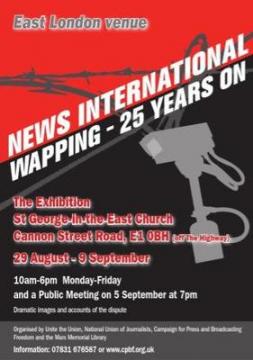 In January 1986 the Wapping dispute was unleashed with the overnight move of Rupert Murdoch’s newspapers to a new non-union printworks and the sacking of 5,500 workers.

Murdoch’s vast resources and the support of the Tory government and its anti-union laws enabled the company to build and staff the Docklands works and dismiss the original workforce.

A year-long strike failed to win justice for them, as the plant was staffed by strike-breaking labour recruited by the electricians’ union, the EETPU, in one of the greatest acts of treachery in labour movement history.

The High Court ordered the sequestration of the funds of SOGAT, the largest union involved,following distribution workers in London refusing to handle Murdoch’s papers. Other unions were fined for contempt or ordered by the courts to refrain from solidarity action.

Police attacks on demonstrations and picketing resulted in more than 1,300 arrests and hundreds of injuries to strikers and supporters. Complaints against the police for brutality and unwarranted arrests led to investigations and inquiries.

The News International dispute occurred at a time of unrelenting attacks on jobs, union rights and communities in many parts of the UK including the newspaper industry. But as well as a trauma for the labour movement, Wapping was a crucial factor in Murdoch’s accumulation of concentrated press and media ownership across the globe.

This exhibition commemorates the determined resistance of the sacked printworkers and the refuseniks. Just as importantly, it will relate the experiences of the time to the politics and circumstances of today.

This article was published on 1 September 2011 by the SolFed group in North London. Other recent articles: