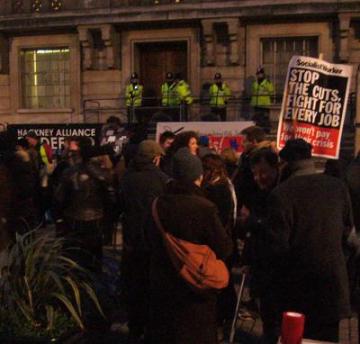 After a slow start, protesters at a March 2nd demonstration in Hackney against Labour council budget cuts made their voices heard with a drive for the doors which temporarily saw panic in police lines amid chants of "let us in" and "it's your jobs next."

The night had started off slowly, with barely 50 people hitting the pavement outside the council's Mare Street headquarters as the cuts discussion and vote, widely seen as a rubber-stamping of government funding plans, went through.

But numbers grew as the evening got colder until around 200 people were stood outside the heavily-fortified building. Police picketed every door with at least three full riot vans on standby and barriers adorned the main entrance in a nod to events which saw Camden and Lewisham councils browbeaten by their subjects late last month.

But the crowd, bouyed up by speeches and music, got lively late on, pushing at a side entrance before occupying the road on Mare Street, and even having a brief go at removing the crash barriers as they attacked "traitor" Labour councillors for waving through an 8.9 per cent cut in funding borough-wide. Council estimates suggest around 800 jobs will go on the back of the losses in an area which is already experiencing some of the worst poverty in Britain.

Inside the building, around 50 observers from the public were allowed to witness the damage as it was being meted out, with one attendee noting "everything was designed to intimidate us and keep us quiet, from the massive security presence through to the agenda which seemed to consist of Labour councillors talking about how progressive they all were with the cuts taking place right at the end. It was nonsense."

Twitter posts from inside the building late on noted that "Labour Benches gave a standing ovation to a speech directed against the public gallery" and "Labour councillors were laughing at the crowd."

The feeling that Labour were traitors for putting through the cuts was strong throughout the demonstration but this misses the point. The party publicly agrees with the need for cuts - of course they do, they're operating in and fundamentally rely on capitalist logics which demand attacks on working people to maintain the stability of the system as the rich get richer. They're never going to be able or interested in taking on that framework.

This article was published on 2 March 2011 by the SolFed group in North London. Other recent articles: