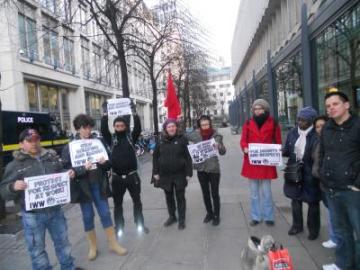 Cleaners at the Guildhall have been holding a sit in and stopping work since the 22nd of December because of mistreatment and intimidation. Early this morning management called the police, who came and intimidated and threatened the cleaners. The cleaners protested that they were holding a completely peaceful sit-in. They finally left due to police threats to drag them out physically.

The cleaners started organising in the summer, striking against unpaid wages. Since then they have been fighting for union recognition, better pay and an end to bad working conditions. After a new company, Sodexho, took over the cleaning contract, their union rep was suspended and they have been subject to all kinds of intimidation and abuse. The workers say there is one supervisor in particular who is abusive to them and there are currently various complaints by different cleaners against him, but Sodexho are refusing to do anything about his behavior.  Sodexho are trying to drive out the organised cleaners by continually changing their work areas, giving them the worst jobs, increasing their workload and, now, using intimidation and harassment.

Four of the cleaners currently have injuries to their arms or shoulders due to the work they are being told to do, verified by their GPs. They feel they are working in a climate of fear. Today a cleaner told us, “What seems incredible to me is that we live in Englandwhich they say is a country which defends human rights, and because I protest for my rights at work they call the police on me. And this supervisor, who is bullying and threatening all the workers, he is untouchable. They call the police on me, and him they send on holiday.” Another cleaner said “For standing up for my rights at work, they have subjected me to constant threats and bullying. For two hours I was shut in an area, two days running, alone in an isolated area and they are carrying on punishing us every day, because every day they give us different work and every day it is harder and harder.” Another said “you know what their aim is? Everyone who worked for Ocean [the previous company that Sodexho took over from] and is in the union and who fights for their rights, they are on our backs until we leave. A lot of people have left and those of us who are still here they are hurting us all the time.”

The cleaners forcefully pointed out to the police the difference between how they were treated for having a peaceful sit in and how the company were allowed to get away with injuring them and threatening them, and left with their heads held high after maintaining their sit in for several days.

This article was published on 31 December 2011 by the SolFed group in North London. Other recent articles: