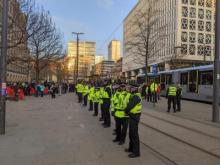 Around two thousand people attended the Kill the Bill demo in Manchester. Though in past demos attempts have been made to block the metro this time it was not possible due to the heavy police presence.

The 10 richest men in the world have seen their global wealth double to $1.5tn (£1.01tn) since the start of the global pandemic following a surge in share and property prices that has widened the gap between rich and poor, according to a report from Oxfam

The charity said the incomes of 99% of the world’s population had reduced from March 2020 to October 2021, when Elon Musk, the founder of the electric car company Tesla, and the other nine richest billionaires had been collectively growing wealthier by $1.3bn a day.

The last 18 months have been quiet for Solfed as a lot of our activity consists of using direct action to challenge employers and landlords. Lockdowns, “social distancing” and online meetings and activities all work against the physical solidarity that this needs. As a local we continued to meet in the virtual world, checking in on each other, having discussions and offering support.

We also continued to be contacted by workers and tenants with issues related to their work or housing. People were invited to meetings to discuss it but online meetings can be exhausting and strange. We discovered how different it is to meet someone for the first time in a little box on a screen compared to being in a room with all the social cues that come with it. For many it was too much and the consequence of sharing difficult issues with strangers on screen meant that they didn’t return. We all shared the frustration of that.

One of the successes we had during this period however was supporting a worker through a grievance process with their employer. This was a baker who we’ll call Peter (not his real name). One of our members acted as his union official in meetings and negotiations. They relate their experience of the process here. 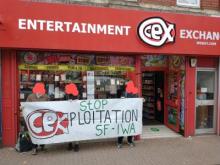 Using the Southampton Renter's Checklist we have produced a Spanish translation. Please see the attachment

If you are facing redundancy it is important you get organised. You should talk to your co-workers and organise a meeting as soon as possible. If necessary meet outside to ensure social distancing. If your workplace is unionised you should contact your union branch. You should also collect phone numbers and other contact details of your co-workers. It is important that everyone keeps in touch throughout the dispute, so consider setting up a WhatsApp group or something similar. Remember, your employer will try to divide you by getting you to compete for any jobs that may be available. Be positive from the outset, stress the need for unity constantly and focus on the failing of the employer.

Get to know your rights