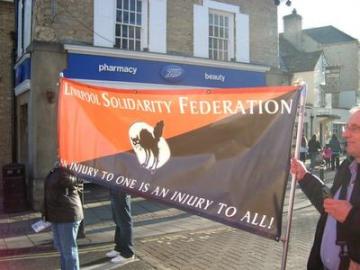 One aim of the protest was to build up to Wednesday 12th , when plans to privatise the Royal Mail will have their third reading in Parliament. This move will likely result in job cuts, an attack on working conditions and a less reliable service for the public. The bill will probably pass through Parliament successfully, but the fight to defeat it must not end there – direct action could make the changes impossible to enforce.

The demo itself was lively and well-attended with somewhere between 500 and 1000 people taking part. The rally however, spoken to by a range of trade union leaders as well as a leading Labour Party member (who received a decidedly cool reception) killed off the energy. People slowly began to drift away at this point with most people having left by the time the last speaker took the stand. The exception to this usual round of speeches came from 12 yr old Nicky Wishart and his sister, aged 14, Beth. Nicky organised a protest through facebook against the closure of his youth centre, and was taken out of school by anti-terrorism police and threatened that if anything went wrong he would be arrested as the organiser! The protest went ahead, and it has clearly inspired them; they spoke with more passion than the rest of the speakers combined, and got by far the biggest cheers.

In conclusion, it was good day out, where Solidarity Federation managed to talk to and leaflet other workers, and took some small steps in spreading the message of anarcho-syndicalism!

This article was published on 11 January 2011 by the SolFed group in Liverpool. Other recent articles: