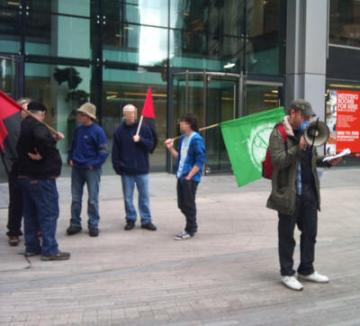 Today, as part of a national day of protest against benefit cuts, Liverpool Solidarity Federation picketed the offices of ATOS origin in the city centre. We were supported in our action by members of UK Uncut Liverpool.

We were there to raise awareness of the role being played by ATOS in the government's war against disabled people.

The company is being paid £300 million by the government to carry out ‘work capability assessments’. The assessments are supposedly aimed at finding out if people receiving sickness benefits are fit to work. The real purpose is to strip benefits from as many people as possible and save the government money.

This testing system has already led to people with terminal illnesses and severe medical conditions being declared fit for work and having benefits cut. GP’s are ignored in favour of decisions made by Atos Origin’s computer. Over two years, the company wrongly refused benefits to almost 30,000 people. Those people had to fight for a year to have the decision overturned.

The response from the public was overwhelmingly a positive one. We had more than a few people approaching us who were either directly affected by ATOS's actions or who knew people that had suffered at their hands, and they wished us well in our picket.

Liverpool Solidarity Federation are disgusted that in a time when people are losing their jobs and being forced to live on benefits, poverty pimps like ATOS Origin are cashing in on the misery of others. We stand in solidarity with the Black Triangle Anti-Defamation Campaign in Defence of Disabilty Rights and Disabled People Against Cuts.

See some more photos from the picket here.

This article was published on 14 April 2011 by the SolFed group in Liverpool. Other recent articles: