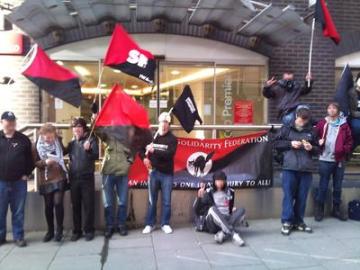 Today, members of Liverpool Solidarity Federation picketed the office of employment agency Adecco in Liverpool City Centre. With the support of members of Occupy Liverpool, we handed out around 400 leaflets to the public during a picket that lasted around two hours.

When we began the picket, the sight of us tying the Liverpool Solfed banner to the railings in front of the entrance immediately drew attention. Two female workers came out to ask what we were doing - initially seeming to think we were a rival recruitment agency! We explained that we were acting in solidarity with the CNT union and Adecco's role in the ABB-EULEN dispute, handing them copies of our leaflet to that effect. After this, they retreated indoors and we had almost no further interaction with staff.

The public were overall supportive and happy to take our leaflets, though we did have one person walk by who refused a leaflet saying "I don't agree with any of it!" On the other hand, we did have two people who stopped to talk at length and express their support for what we were doing. Many others wished us good luck in our cause as they passed.

Throughout the day, Adecco received very little custom and nearly all of those who we gave leaflets to were passing by rather than going in. This suggests that, despite the sign in the window listing them as a Sunday Times top employer, many people are already aware of the realities of the casualised and precarious employment that companies like Adecco offer. Meanwhile, they felt threatened enough by our presence to turn off the automatic doors so that they had to let their few clients in manually.

The picket ended at three, though not before a police Matrix van passed, the cop in the passenger seat doing a double take as a saw us. Not too long after, a police car turned up to see what was going on. Unfortunately for them, at that point most of those present had already left whilst the few of us still there were just loading everything into cars. Which offers a somewhat amusing counterpoint to the violent police response to an anti-cuts protest outside Liverpool Town Hall.

The CNT's dispute in Corboda goes on, and whilst it does we wish them full solidarity in their struggle. It demonstrates just how much of a threat outsourcing poses to workers, and should their be prolongued strikes in the UK in the near future, we should have no illusions that agencies like Adecco will be happy to supply scabs here too. Their fight is our fight.

This article was published on 25 January 2012 by the SolFed group in Liverpool. Other recent articles: