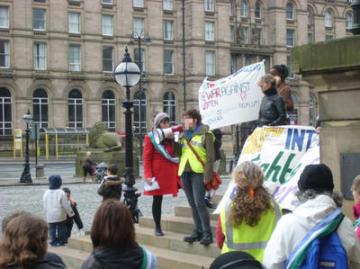 A lively crowd of several hundred people met on St George's Plateau to listen to a range of female speakers share their thoughts on the struggles women continue to face on a daily basis.

A young doctor spoke movingly about treating an Iranian woman who had been beaten by her husband and kept like as a modern-day slave. Another speaker insisted that a more feminine ruling class is nothing worth fighting for, while our real objective should be total equality between women and men. Meanwhile, an anti-cuts campaigner highlighted the fact that services primarily used by women are among the hardest hit by the current slash-and-burn agenda of the political elite (for instance, the Rape and Sexual Abuse Centre has had funding for sexual violence survivors completely withdrawn by Liverpool City Council).

Following the speeches, the assembled crowd took to the streets of the city, stopping at symbolic points along the way to remember that the struggle for equality between the sexes is far from won. In fact, it is just one battle in the wider fight for complete working-class self-liberation.

As anarcho-syndicalists, we are the sworn enemies of misogyny, sexism and patriarchy. We also believe that the class struggle and the fight for women's emancipation must go hand in hand!

This article was published on 13 March 2011 by the SolFed group in Liverpool. Other recent articles: