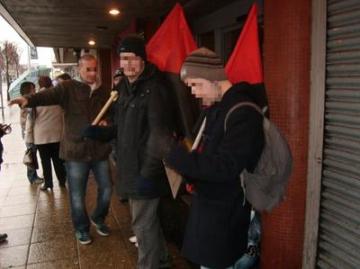 Liverpool Solidarity Federation members joined a picket line today to show support for comrades in the Public and Commercial Services (PCS) union. The aim of the picket was to try and prevent scabbing by workers defying an overtime ban voted for by union members to defend civil service jobs.

Q&A with a SolFed member and PCS activist

What’s this action all about?
PCS have been in dispute with the government for some time now over proposed changes to the Civil Service Compensation Scheme [CSCS]. This is the scheme which says how much compensation members get if made redundant, and naturally with job losses on the horizon they want to lessen the cost. It was the previous government’s refusal to negotiate on this matter that necessitated the 3-day strike in March and the court case, which PCS won.

But we also passed an overtime ban, in response to management across the civil service using overtime to mask the effect of job cuts. The two are directly related, as we saw earlier in the year when our management here in Bootle began offering overtime immediately after they decided not to renew the contracts of 90 fixed-term staff, despite the work being there for them to do. Now, as we face more job losses and possibly even office closures, overtime is on the cards again. It’s transparent.

It’s hard to do a picket during the week, when people are working anyway. But today the building is only open for overtime.

How many people have been taking it up?
Unfortunately, a fair few. Last Saturday there were about 24, today there have been more than 30. And some are doing it during the week. It’s not a huge percentage in a building with a thousand plus staff, but it’s still disappointing.

What are the excuses?
It’s the same old garbage, really. Some are just cocky and grin as they walk past, putting their co-workers’ jobs in jeopardy, but the excuse of most is “I need the money,” or “I’ve got to.” The fact that it’s Christmas also comes up – even though they won’t get a single penny until the end of December.

It just boils down to greed, really. PCS have a strike fund and a credit union, if people need the money, but at the end of the day reps and those honoring the ban have bills and mortgages to pay too. Our branch organiser has a baby on the way, and personally I could do with a new kitchen and bathroom. But we need jobs in the long-term more than 30 pieces of silver.

What about the general public?
Public support has been brilliant. As well as cabbies and bus drivers honking in support, we’ve had passers-by wishing us well and it’s great to see yourselves and others coming down to show us support by joining the picket. One guy even took it upon himself to convince the bar staff in Yates’s [the pub next door to the building] to give us free cups of coffee to warm us up!

What next?
We’ll have to see. PCS are looking to have national demonstrations as soon as possible, and there’s even been talk of gaining support for a one-day general strike. But the TUC are keen on a much slower and more passive anti-cuts campaign, and it’s a hurdle we still have to overcome. The overtime ban will continue as long as jobs are on the line, and hopefully the broader campaign will continue to build momentum.

This article was published on 4 December 2010 by the SolFed group in Liverpool. Other recent articles: