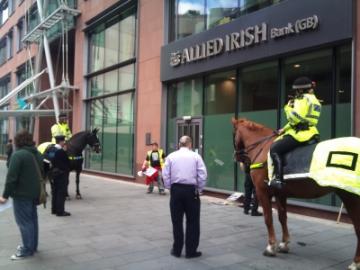 As part of the international week of action against Ryanair, on Friday 16 March Liverpool Solidarity Federation members joined John Foley of the Ryanair Don't Care Campaign for pickets in the City Centre. The targets of our action were a bank and a solicitors who are complicit in the budget airline's recruitment scamming.

The Allied Irish Bank formerly provided 3500€ loans to probationary cabin crew for their training with Ryanair, though they stopped this practice in 2010 under pressure from the Ryanair Don't Care campaign. More recently, however, it has come to light that they are still sending threatening letters to terminated staff, warning them to pay up outstanding fees (for training they did not finish!) or face bankruptcy.

When we arrived at the branch in the commercial district, we found the bank manager and his staffstanding around drinking beer. There were collective groans at the sight of us, bearing banners and placards, though they allowed John to present them with a demand letter and condemn their practices before we headed out for the picket.

Outside, we put placards and flags on display and handed out leaflets to the public whilst John got on the megaphone to condemn the bank. By and large, the public were receptive to the message - with many expressing their disgust at Ryanair and support of our picket, whilst others came over to have their picture taken with the man who had handcuffed himself to the goalposts in the Everton match.

One of the AIB suits didn't take it as well as her colleagues, however, and told us that we were on private property (we were in fact on the public highway) before rushing to call the police. This led to the absurd spectacle of a Police Community Support Officer accompanied by two mounted officers coming along to see what we were up to. Though they insisted that we move away from the door, and tried to take our details (we refused), they largely accepted that this was a peaceful picket and let us carry on.

Having sustained it for about an hour, we ended the picket soon after the police left and took a break for lunch.

Having eaten, we then headed over to the docks and Daniel Silverman Solicitors. The solicitors are also guilty  of sending threatening letters to terminated Ryanair staff, demanding payment or bankruptcy, and they had to be told that this was unacceptable.

We gained entrance to the office building they were located in when staff from other businesses in there exited for a smoke, and quickly made our way up to the second floor. As soon as John entered the Daniel Silverman offices, a manager appeared and declared that she would speak to him outside, indicating that she knew who he was and didn't want her staff to be aware.

John refused to leave and insisted on handing her the demand letter in front of everyone. This led to a brief confrontation were two men tried to force John out the door, but he left of his own accord having said his piece and handed over the letter.

All in all, it was a succesful day, with two companies complicit in the Ryanair scam having gotten the message that people are prepared to oppose them and take direct action to that effect. But the week is not over yet, and tomorrow we will be picketing Liverpool John Lennon airport as part of the continuing protest.

This article was published on 17 March 2012 by the SolFed group in Liverpool. Other recent articles: