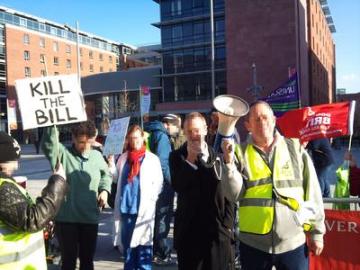 At the beginning of the protest, there were up to 100 people in attendance. The Socialist Singers broke the silence, and the steady flow of delegates to the conference meant there was always someone to engage with and hand out leaflets to. However, whilst most remained inside the small pen and much of the open space nearby was empty it emphasised that this was a small demo and the lack of union banners aside from some Unite and Unison flags and one PCS branch banner only added to the sense of isolation. There weren't even any paper sellers from local Trot groups milling about as there usually are on such demos.

After about 10 o'clock, half the demonstration disappeared and silence began to creep in. There was an interlude when the megaphone was passed around for both chanting and speaking, including several delegates from the conference who came out to voice their support for the cause. And again when a photographer for the Liverpool Daily Post had people posing for pictures. But for most of the time people milled around talking and the stillness grew.

At half past eleven, as Lansley was due to give his speech, the protesters took up their banners and marched around to the other side of the convention centre. But once there it was simply a case of more chanting and holding banners whilst the numbers began to whittle down. There was no sign of the health minister, and a growing sense that the protest would pose little challenge to him if he did show his face.

In all, the demonstration only served to highlight just how absent the left and the trade unions are from the fight over the NHS. The campaigns exist, and the people working on them cannot be faulted in their dedication. But people need to engage far more with them and not abdicate responsibility to a handful of protesters.

We have the NHS and the welfare state because the government feared that a war weary working class would turn its guns on them. In the words of the Tory MP Quintin Hogg, "if we don't give them reforms they'll give us revolution." In fighting to defend the NHS today, we need to inspire the same fear. The TUC's candlelit vigil was at best an utterly inadequate response to the Health and Social Care Bill. UK Uncut's attempt to block Westminster Bridge was more along the right lines, but ultimately not enough on its own.

What we need to defeat the government is not static protests and petitions, but direct action. This means strikes in the health sector alongside blockades and occupations with the explicit aim of causing disruption. When people like Lansley show their face in public, they need to be hounded at every step and driven out by the collective anger of the people whose health system he is ripping away. But we can only do this if more people put their time and energy into fighting for the NHS. The next time there is a mobilisation on the subject, it shouldn't dredge up 50 people, but 5,000.

This article was published on 22 October 2011 by the SolFed group in Liverpool. Other recent articles: