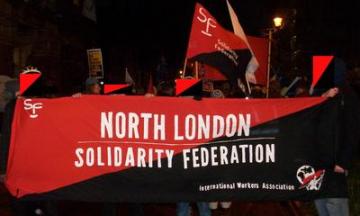 Three members of SolFed were joined by an IWW member as the protest wound its way to the town hall, where a very small visible police presence was backed up by a slightly larger group of strong men. When the Labour mayor, Sir Robin Wales, walked past saying there was nothing he could do about the situation, the leftist and reformist-dominated crowd implored him not to make ‘Tory Cuts!’; they were duly ignored.

One could hear grumbles even amongst the non-anarcho crowd about storming the Town Hall, and learning from what the workers were doing in Wisconsin.[2] Some demonstrators hovered around a set of side doors, but learnt that they did not lead to the same part of the building as the main entrance. All the while the grinning paper sellers of the SWP seemed content that their stall had been the only one at the Town Hall. By chance the SolFed members bumped in to an ex-member who had decided to get involved again, which, for us at least, ended things on a high note.

The protest was by no means as effective as other demonstrations that night, most notably at Camden, but hopefully more militants and people disgruntled with leftist dogma will be more disruptive in the future.[3] Even then though, protests can only achieve so much. Their development in to an economic blockade is a necessity, and something an increasing number of SolFed members are advocating. It is up to us and like minded workers to agitate amongst the rank and file and ignore the TUC bureacrats if we are to have any chance of defeating the cuts, the bosses, and the whole rotten system.

Chants about 'tory cuts' had

Chants about 'tory cuts' had to be the most cringe-worthy thing I have come across in a long time.

This article was published on 1 March 2011 by the SolFed group in North London. Other recent articles: