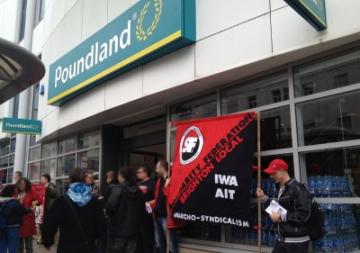 On Saturday Brighton Solidarity Federation were joined by Brighton Benefits Campaign on our first picket in the national campaign against Workfare profiteers Poundland. Over the course of two hours we handed out a thousand leaflets and struck up many conversations with the public at their North Street store. This follows the high court ruling that the DWP were within the law to force two unemployed workers out of voluntary work and into unpaid labour at the store.

Poundland, whose profits have risen dramatically in these times of austerity, have re-joined Workfare with enthusiasm and our message that this represents an attack on the conditions of all workers, employed and unemployed, was met with considerable interest. We lost count of how many potential customers were turned away by the picket and were buoyed up by this clear demonstration of class solidarity. This followed a member visiting the store earlier in the day to hand out letters to Poundland workers explaining that our action was in solidarity with both them and the working class as a whole.

There was a good turnout for the picket and we regard this as a highly positive start to the on-going national campaign against Workfare. Following the victory against Holland & Barrett, who withdrew from the scheme following concerted national pressure, we believe a nationwide escalation strategy involving various groups opposed to Workfare will deliver the goods and force Poundland to also withdraw. End unpaid work!