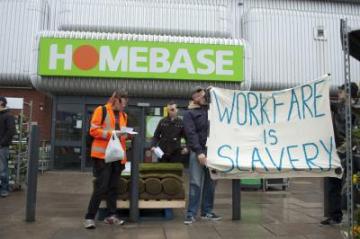 The continuing struggle against workfare was taken, by Bristol Anarchist Federation, to the door of shameless exploiters at Homebase. Bristol Solidarity Federation responded to the request for support and turned up to spread the clear message - "Workfare is Slavery"

After it was recently revealed that management at the Haringey branch of Homebase had it tapped into a seemingly endless source of free labour. It was clear that a new target of anti-workfare activists was emerging. The Haringey store bosses had been caught bragging about that it was getting 750 hours of free labour every week in their store.

A leaflet informed the shoppers at the store of Homebase's need to exploit the unemployed to boost profits, strip workers of hours and reduce overtime. This was clearly shocking news to the Homebase visitors. The disgust of everyone who took at leaflet was evident. One man went into the shop but then had a change of heart. He told us "I was going to buy something - but fuck it!" If everyone did this then Homebase would quickly pull out of Workfare.

The demo was monitored by the local police. Though they they did little to stop the demo happening outside the front door. When challenged to why they had turned up, they said it was protect the public. Then why we asked, at a recent demo, was the knife brandishing manager from Poundland not arrested? No answer was given. Deciding it was easier to listen to the radio in their car they scutttled off.

This article was published on 14 April 2013 by the SolFed group in Bristol. Other recent articles: