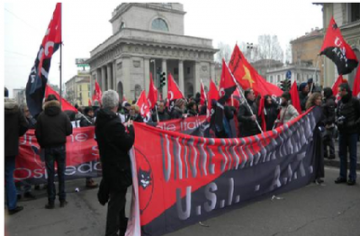 On Friday the 3rd of June, four members of the North London Solidarity Federation were lucky enough to sit down with and engage in comradely discussion some twelve members of the Milan Local of the Italian USI – AIT.

As one North London SolFed member is currently residing in Milan, when USI heard that other NLSFers were coming to town, they requested we join them at their local office (well, one one of two local offices) to discuss what sorts of activities IWA members have been getting up to in London. Acting through two very capable interpreters, North London led a discussion on the 'structure, strategy, and practical activities' of London Solfed. In particular, USI were interested in our training program, our relationship to other radical organisations in the UK, and the UK student movement. They also seemed to be quite impressed with the quality of our publicity with both organisations exchanging newspapers, leaflets, and posters.

We updated them on the Office Angels victory and the gender discussion going on with SolFed. We then began a question-and-answer session between the two organisations. Milan USI is the largest Local in Italy with over 500 members and is most active in the city's hospitals—where their posters and propaganda can be found all over the buildings. They've led numerous and sustained actions and have recently won an across-the-board pay rise for all workers at a particular hospital. When asked about how they've succeeded in attracting such a large membership, they informed us that they never promise new members that they'll win every fight, but they do promise that—unlike the sindacati tradizionali—the members will be in total control of the struggle. USI's membership seems to be a bit older than ours and they are obviously a very organised group. All North Londoners were in agreement that we've never seen such tidy anarchist office and also enjoyed the fact that—in true Italian style—it is always well-stocked with wine.

Concluding the evening—and in a true show of Italian hospitality—USI then treated their British “cousins” to a meal. They informed us that sometimes USI gets mistaken for the “Italian CNT”, but as far as they are concerned, they are as much the “Italian Solidarity Federation” as we are the “English USI”—a flattering statement indeed. North London SolFed hopes the meeting was just the first of many and looks forward to further solidarity with our Italian comrades.

This article was published on 5 June 2011 by the SolFed group in North London. Other recent articles: