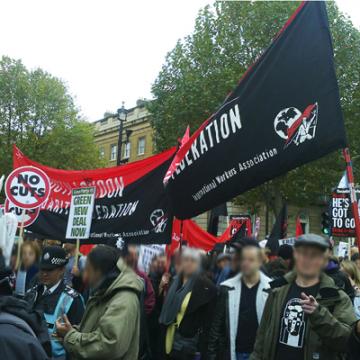 It has to be said today went well. An anarchist contingent several hundred strong gathered at Harmsworth for the big march into central London, with more red and black flags than ever and plans to totally ignore Hyde Park's selection of crusty bureaucrats telling us that we (ie. they) are "being heard" to ask nicely for slightly less austerity, please? Oh go on, pretty please?

Despite a large escort of police and a helicopter assigned specially for us (we had a chopper above us from about 11am to 5pm) we weren't deemed a major target for the most part, and made it to Trafalgar Square with little incident and a lot of happy folks taking papers, leaflets etc. At the square we made a sudden breakaway to head up and join Boycott Workfare as part of our ongoing campaign to bring down a piece of legislation which sees companies and charities using free labour from the unemployed to undercut low-paid workers' conditions.

Between 50 and 100 people came along with us as we headed to a number of Workfare participants starting with McDonalds, where we blocked off the doors with chants such as "Nooooooo wages? Oooooooutrageous!" (congratulations to the main man on the megaphone by the way, that was some epic chant leading).

This was followed by The Salvation Army, where they seemed vaguely entertained, then on to another McDonalds, where they took the bizarre decision to lock their own customers in for a while. It's a bold way to increase custom, for sure. M&S, just down the road, was next and treated to a rousing rendition of "You say Workfare, we say unfair!"

Primark (below) was fifth on the list, largely shutting down the road nearby as a combination of protesters, badly-parked police vans and shoppers totally filled the street, forcing drivers to listen to explanations of precisely how Workfare is stripping claimants of their dignity while putting hundreds out of work. We finished up with a third McDonalds, by which time reports were already circulating that the mad, bad Solidarity Federation had been taking part in "anti-social behaviour" (15.55) - mind you, the Guardian seemed to be accusing UK Uncut of terrorism today, so as libels go ours was at least pretty mild.

What was notable today is that our numbers are up on last time, despite a serious drop-off of numbers for the TUC rally as a whole. So if today says anything it's that the number of people who are prepared to go on an A-B anti-cuts march so they can listen to Ed Miliband say "oh, well we'd do the same, fnar fnar" is shrinking. The number of people who are prepared to directly confront businesses and force change through direct action is on the rise.

This article was published on 20 October 2012 by the SolFed group in North London. Other recent articles: