Downhills Primary School, in Tottenham, North London, is fighting a strong community campaign against attempts to turn it into a sponsored academy.
Participation in the campaign has been huge. “I haven’t seen anything like it since the eighties,” said one mother looking at a packed meeting of over 600 people.
In January, more than a thousand people marched through Tottenham in support of the four Haringey primaries which are under threat of being handed over to academy sponsors, including teachers from all over London. They have shown support to other schools across the country which are rejecting academy status.

The academy schools program began in 2000 under New Labour. They are state sector schools run independent of local authority control and with a private sponsor. Less than two ago, there were less than 300 academies in England, but the Academies Act 2010 sought to expand the number of academies and there are now over 1600. Some  schools that are deemed 'outstanding' by Ofsted have been ‘fast-tracked’. It is thought that many 'outstanding schools may not even need a sponsor, and might be able to opt straight out of local authority control regardless. 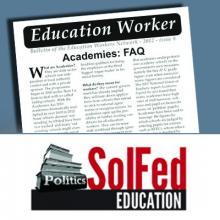 The latest issue of Education Worker, the EWN's bulletin is out, with an Academies Special! We lift the lid on what's happening in schools and academies in particular: what they are, what they do, why they are a problem and what should be done about it. EW#8 can be downloaded from the site, or ask your nearest SolFed local.