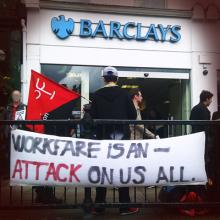 When we discovered a day before our planned Week against Workfare that Holland and Barrett had pulled out of the government's "replace paid jobs with JSA conscripts" scheme we almost found ourselves at a loose end.

We've spent months doing scary-dangerous things like handing out leaflets, waving placards and sending emails of complaint, so in the absence of H&B we had to ask ourselves, who deserves a swift kick to the ethics most this week?

Fortunately we're up on our current affairs and the answer came quickly - a Libor fixing, unrepentant banking giant led by sociopaths which is so greedy it still uses Workfare to get its menial tasks finished. Yes, we went after Barclays. Never let it be said we think small. 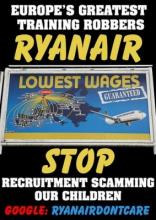 The Ryanair Don’t Care Campaign, supported by the Solidarity Federation in the UK and the IWA internationally, is calling for a Week of International Action against exploitation and recruitment scamming by Ryanair, starting on March 12.

Ryanair Don’t Care was started by John Foley after his daughter was sacked as a flight attendant mid-flight and abandoned abroad without any money. This led to the exposure of a cynical and highly exploitative recruitment scam by Ryanair.