A dinner lady came to Brighton SolFed when there was nowhere left to go. They were facing a disciplinary hearing after being unfairly blamed for an incident, and they additionally were refused mainstream union representation. Brighton Hospitality Workers helped the worker prepare for the disciplinary and accompanied them to this stressful encounter. Solidarity means supporting your fellow workers, solidarity is what makes us strong.

Over 90% of all facilities and services at Sussex University are being sold off to private companies; Management have for months ignored petitions, meetings and demonstrations of thousands of students, staff and lecturers opposing the plans.

Student at Sussex have occupied Bramber House Conference centre to force Management to listen to students and workers on campus, and take their opinions on this seriously. Stand up to management, stand up for Sussex! 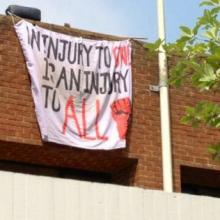 As reported in the last Catalyst, Britain's biggest insurer is axing over 2,000 jobs in one of the worst examples of outsourcing to hit the UK. It is now clear the job losses are to be centred in Norwich, York and Perth. Norwich has already been hit in a drive to outsource 900 jobs to Delhi and Bangalore. Amicus, who called the move 'despicable' and vowed to fight it, has delivered little in terms of saving workers' jobs.

Outsourcing, recently endorsed by Labour Cabinet ministers as good for business ("and therefore good for us"), is projected to strip 200,000 jobs from the UK by 2008. Most of those affected are doing data input or call centre work: sectors already notorious for their high turnover of staff. Hence workers with little legal or union protection are being protected, and while the unions aren't much cop, they are invariably better than nothing.