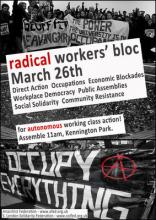 On Saturday 26th March the Trades Union Congress has called for a march against the cuts, and there is going to be a South London feeder march starting at Kennington Park which we will be joining. We are calling on anarchists, libertarian communists and militant workers from across the country who agree with the principles of solidarity, direct action, and self-organisation to join us on the demonstration to provide a visible presence and a revolutionary alternative to the reformism of the TUC.

Fears are growing for the 72 immigrant workers detained by the UK  Border Agency  (UKBA) at Guy and St Thomas’ Hospital, London in Februrary.  Very  little is known of the whereabouts of the 72 disappeared, who had been contracted to work as ancillary staff in the hospital by Reed temp agency.

The only definitive update to emerge since the raid is that three of them have pleaded guilty to ‘fraud’, a charge levied against  them for collecting their ‘illegal’ wages from the hospital (as if  cleaning toilets for minimum wage wasn’t bad enough). In the spirit of revolutionary self-education, members of the North London Local of the Solidarity Federation spent a couple hours this past Saturday learning the basics of computer design and layout.  In a relaxed atmosphere, we put to good use the skills of one of our members as he set up a projector and walked us through the steps of designing a newsletter before installing the design programme on each of our personal computers (open source, of course).

All attendees agreed it was an enjoyable and educational experience and are looking forward to the second section of the workshop which will build on our basic knowledge and move from the "how" to the theory and good practice of successful layout and design.

On Saturday 29th January, at least a dozen SolFedders from London and the surrounding area joined thousands of students, trade unionists, and workers to march in opposition to cuts to services, job losses, and increases in fees.  A similar demonstration was held Manchester where Aaron Porter, the sellout head of the NUS, had to be escorted away by police as he was taunted and chased by angry demonstrators.  Needless to say, SFers in both cities applaud the Manchester crowd in recognizing that sometimes our class enemies try to speak in our name.

North London members tapped in to their inner-artist today to create a truly beautiful new banner!

Long after the mysterious dissapperance of our old one, it was time for NLSF to create a new banner for all those marches and demos. 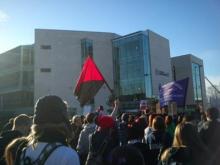 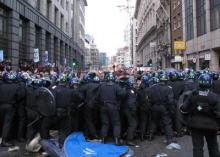 A campaign of demonisation has started against the students who trashed Tory HQ on Wednesday, who are being portrayed as unthinking thugs. We re-publish here an article about what happened at Millbank by one of the participants.

Yesterday was glorious. It was inspiring, fun and yes, ‘anarchic.’ I spent most of it laughing and hollering into the brisk air on those sunlit streets. Scary, huh? The news reports seemed to think it was very serious. That may have been because of the seriousness of the cause for which the demonstration was organised, and indeed the violence of the attack on education by the politicians, directors of institutions and the rest, is far greater than anything demonstrators could have dreamed of doing, even the absolute plank who chucked a fire extinguisher from the roof.

Hackney council sees itself as New Labour's laboratory for wholesale privatisation of local public services. Back in May, Catalyst reported on the attacks on council workers' pay and conditions in Hackney. Since then, in many ways, things have gone from bad to worse.

HACKNEY - FOR SALE - this offer is not available to the poor!

Description: Formerly a nursery, but we got rid of the kids + their whining parents. We even fibbed in court, to get rid of the squatters who had reopened it as a community centre of all things. We told the master that we were not going to sell this building but, Ha! - It is now freed up to give lots of potential for profit as a yuppie wine bar or a private health club for city workers to unwind and spend lots of their hard earned dosh.