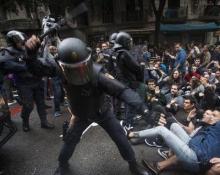 Calderdale SF/IWA condemns the police violence against Catalan citizens on the 1st October 2017 who went to vote on what the Spanish state has declared to be an illegal referendum on independence. While, as anarchosyndicalists, we don't support the creation of a new state, which reflects mainly the interests of the Catalan bourgeoisie, we do condemn all police violence and intimidation against men, women and children. Instead of the creation of new states with warring police and capitalist factions pitted against one another, we favour the deeply embedded solution of libertarian federalism - free, self-managed communities that are plural, open and tolerant.