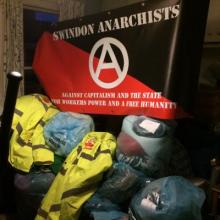 On the 24th of October, members of Swindon Anarchists, including SolFed members, took 3 vehicles crammed with supplies to the refugee camps of Calais.
As numbers at the camp swelled to over 6,000, the group decided we had a responsibility to offer what solidarity we could to men, women and children forced into cramped, cold and unhygienic conditions just for seeking a life free of war, persecution, poverty and hunger. As well as hoping to improve material conditions in the camp, we reject the concept of national borders, embrace freedom of movement for all and support all those whose circumstances have forced them into conflict with the border regime, the political class and their stooges in uniform.