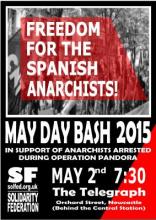 Newcastle SolFed are holding their annual May Day Bash on Saturday 2nd May at The Telegraph pub, Orchard Street, Newcastle - doors open 7-30pm. This year we will be raising awareness and hopefully a few quid in support of anarchists arrested in Operation Pandora, a Spanish State anti-terrorist initiative that has been used as a represive measure against those opposed to the State and Capital, with dozens of anarchists arrested. Spain has a long and strong tradition of anarchist organising and this abuse of civil liberties supported throughout mainstream Spanish media is a potent reminder of the origins of May Day in 1886, where anarchists in Chicago were framed in the famous Haymarket massacre. The media fuelled the witch hunt against those anarchists, demanding the death sentence which saw 4 of the accused hung, only to be pardoned 7 years later.