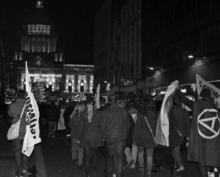 On the evening of 29th November Belfast Solidarity Federation took to the streets of Belfast with over 300 others to reclaim the night.
Set to become an annual event we all marched to demand an end to harassment and violence against women. There were speakers from Hollaback, Sex Workers Alliance Ireland, NUS USI Women’s Campaign, the Black and Minority Ethnic Women’s Network, Belfast Feminist Network and Gender Jam NI.
Somewhat at odds with the notion of taking direct action on our city centre streets the last speaker welcomed the police presence indicating they were there to “protect us” and without a hint of irony proceeded to announce we were reclaiming the night!