Three Bristol Solidarity Federation members travelled to Bath today (26th March 2016) on an Easter Bank Holiday weekend to picket the ‘Jimmy's' restaurant there after a request from the Brighton Hospitality Workers for collective national direct action against their bosses after they refused to pay them about £1,500 in owed wages and have yet to supply them with a P45.

While The Ritzy workers marched through London demanding the Picturehouse chain pay the London Living Wage.  In Bath members of the Bristol local of the Solidarity Federation leafleted the cinema goers and asked them to consider a future boycott of the cinema because of the chain's refusal to pay a decent wage to the staff in London. The local staff and visitors were highly supportive of the picket and were disgusted to hear of how a profitable company is refusing their staff a wage that they can live on.

This dispute is becoming increasingly bitter. Boycott the Little Theatre. Bring the Picturehouse to its knees. 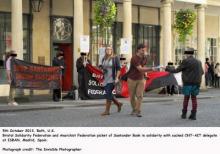 Following on from the successful protest in Bristol against the sacking of a CNT delegate at Isban, the subsidiary of Santander. The Bristol Local moved the message to the streets of Bath. Around 15 members of SF and other activists from around the region, continued the message of solidarity that has been demonstrated around the world.

The message of the rejection of agency work and the reinstatement of the fired worker has been spread by sections of the IWA-AIT. In Spain CNT members held demonstrations in Salamanca, Ciudad Rodrigo, Barcelona, ​​Madrid, Villaverde, Zaragoza, Malaga and Leon. In working class area of Madrid Santander banks and ATMs were targeted. With message of solidarity sprayed on windows and the ATMs put out of action.