Union members at Fujitsu have announced a series of strikes—as bosses dismissed victimised reps. The first walkout will begin on Wednesday 24 January. Management sacked two reps over the christmas with one of the reps being dismissed  while he was on compassionate leave to attend a family funeral.

These are just the latest attacks in a long running dispute over compulsory redundancies, victimisation of reps and breaches of a redundancy agreement. IT workers at Fujitsu in Manchester have already taken 27 days action in this long running campaign and plans further  strikes  on Wednesday 24 – Friday 26 January, Tuesday 30 January and Thursday 8 February – Wednesday 14 February. Union members are also taking part in action short of a strike and are working to rule. 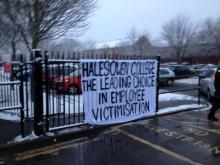 Discontent has been brewing at Halesowen College, Birmingham, following the summary dismissal of no fewer than four Maths teachers in the last month, including Dave Muritu, the College’s UCU Branch Secretary. The College has seen pickets, lobbies and widespread condemnation for its persecution of teachers, seemingly solely for raising issues of genuine concern to do with their students’ educations.