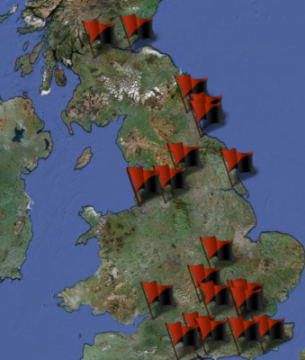 Last week, at SF's national delegate council two new locals were recognised, we are pleased to announce we now have locals in Croydon and Newcastle. Both locals provided encouraging reports and were founded by members of existing locals, South London and West Yorkshire respectively.

We hope to add more locals in the months and years ahead and have members across the country working on starting new locals, notably across the south coast in Portsmouth, Southampton, Bournemouth, and Hastings.

Our Scottish members based in Edinburgh and Glasgow will hopefully be launching locals at some point in the future and back down south we have members in Cambridge looking to start a local.

If you live in any of these areas and want to apply anarcho-syndicalist methods and tactics to the class struggle and help build a revolutionary union please get in touch!

As well as recognising the two new locals, SF also recognised a student network for student members to organise collectively which will work closesly with the Education Workers' Network.

Motions were passed around the campaign against workfare and one to seek a closer working relationship with our comrades in the Anarchist Federation.